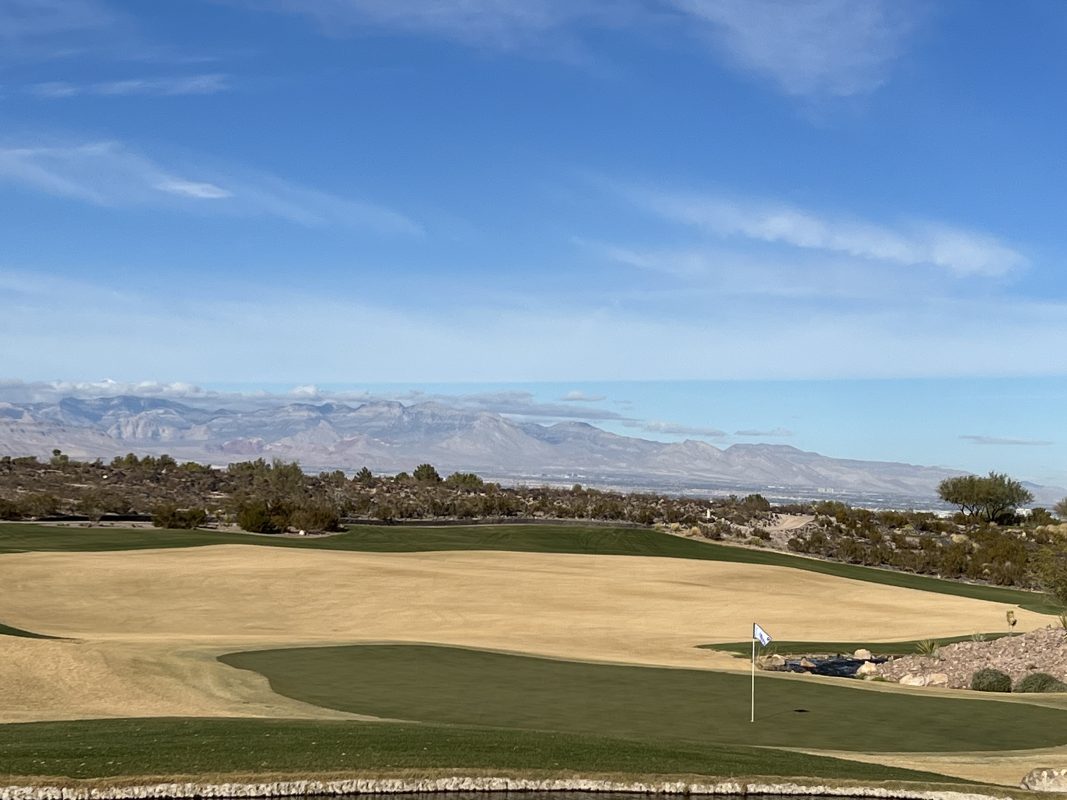 On Friday, Dec. 2, the course at Anthem Country Club reopened after a shut down of 5.5 months to replace each green and fairway. The new renovation with drought-tolerant and warm seasons is estimates to save at least 30 million gallons of water annually while maintaining optimal playing conditions. Overall, the project will cut Anthem water use by at least 30 percent. –By Brian Hurlburt, Founder

It is no secret that Las Vegas and the Western United States are in a drought and everyone is being asked to do their part to conserve.

As such, the member-owned Anthem Country Club made the difficult decision to assess members and make a multi-million dollar investment to be a good community partner.

“Anthem Country Club is a great example of how golf courses can reduce water consumption and be part of the conservation solution without sacrificing the quality of the golf experience,” said JC Davis, Enterprise Conservation Manager, Southern Nevada Water Authority. “By converting approximately 1.7 million square feet of grass to cool-season turf, they are saving nearly 36 million gallons of water annually. They also converted half a million square feet of grass to water-efficient landscaping and artificial turf over the past 15 years, which saves tens-of-millions of gallons every year. Anthem Country Club is leading the way, and we hope other courses that have been reluctant to take these common-sense measures will follow suit.”

The SNWA says that overall, the Las Vegas golf industry “is doing it right” when it comes to water efforts. Area course superintendents are doing everything they can to save every ounce of water. Symons was tasked with overseeing the Anthem project and the results are rewarding.

“The water crisis is much larger than just Anthem Country Club, but our membership is proud to be a good community steward and to lead by example,” Symons said. “The greens project included replacing the greensmix (Sand), drainage, modifying the surface contours, and planting a much more advanced Dominator creeping bentgrass. For the fairways, we have replaced 35 acres of cool-season ryegrass with warm-season Bandera bermudagrass. For these converted areas, our estimate is that we will use 30 percent less water than we were previously using as a result of this project.”

Future water conservation projects at Anthem Country Club include the removal of an additional 10 acres of non-playable turf on the golf course, 10 acres of ‘non-functional’ turf within the surrounding community, and the ongoing replacement of the ryegrass that surrounds the fairways with the Bandera bermudagrass. These projects will result in additional and substantial water savings.

Anthem Country Club members and executives continue to partner with the overall Nevada and Southern Nevada golf industry to ensure the future of the sport and business, which makes nearly a $2 billion direct economic impact in Nevada. In the most recent economic impact study conducted in 2018 by key industry Nevada golf organizations led by the Nevada Golf Alliance, the following were some key results:

“We would not have undertaken the totality of our greens and fairways renovation project were it not for the ongoing water drought conditions in Southern Nevada and throughout the Western United States,” said Shelley Caiazzo, general manager, Anthem Country Club. “We want to be community leaders and partners, and, as such, we made a large financial investment and closed the course for five months to replace each of our greens and fairways. The result will be an ongoing, dramatic water savings of more than 30 million gallons annually. Our greens renovation was already in the planning stages, but our membership and leadership team quickly made the decision to also replace each fairway solely because of the continuing water crisis and due to recent and substantial water allotment decreases for golf courses.”

Since the early 2000s, golf courses participating in the Southern Nevada Water Authority’s (SNWA) Water Smart Landscapes Rebate Program (WSL) have converted more than 403 million square feet (936 acres) of thirsty grass to water-efficient, drip-irrigated plants, and trees. This has resulted in savings of more than 2.2 billion gallons of water. In exchange, golf courses have received more than $41 million in cash incentives through WSL, allowing them to reduce maintenance budgets and concentrate their financial resources in other areas.

Adhering to strict water budgets also has contributed to golf’s positive net effect on our community’s water savings. Beginning in January 2024, these water budgets will be reduced from 6.3 acre-feet per irrigated acre to 4 acre-feet per irrigated acre. An acre-foot of water equals about 326,000 gallons. The potential water savings to be realized through this reduction, coupled with ongoing landscape conversions through the WSL program, will add to golf’s reputation in Southern Nevada as a leader in water conservation.

Anthem Country Club is located 15 minutes South of the Las Vegas Strip in Henderson, Nev., and features dramatic views of the entire Las Vegas Valley due to its location in the foothills of Black Mountain and elevation of 2,600 feet. The crown jewel of Anthem is the par-72, 7,373-yard championship golf course designed by Hale Irwin and Keith Foster, which is accented by comprehensive practice facilities that feature a double-sided range, two short game areas and multiple practice putting greens. The 37,000 square foot clubhouse offers several dining options, a full-service golf pro-shop and locker rooms.  The clubhouse grounds also include a newly-remodeled, 13,700-square-foot fitness center and pool, six lighted tennis courts and four pickleball courts. For more, visit AnthemCC.com or call (702) 614-5000.