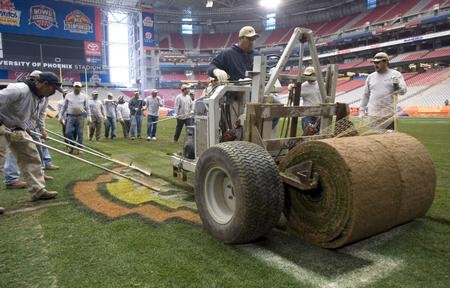 The grass soon will be greener in Glendale.

A freshly cut layer of sod is being rolled out at University of Phoenix Stadium this week, designed to give millions of television viewers a vibrant impression of the new facility and players a reliable playing surface when Glendale hosts the BCS national collegiate football title game on Monday.

Work inside the stadium kicked off at 7 a.m. Tuesday and continued until 1 a.m. this morning. The process must be wrapped up by 9 a.m. today when things such as logos, end zones and hash marks are scheduled to be painted.

Up to 500 rolls of Tifway 419 hybrid Bermuda sod were transported on flatbed trucks from the company's Scottsdale farm to the Glendale stadium. Each roll weighs 2,100 pounds.

Because of the quick turnaround between games, the new sod will be cut at 1-inch thickness instead of the traditional half-inch cut. That gives the playing surface more mass and players from Ohio State and Florida a firmer footing.

"You could actually play the next day on this," said Danielle Marman of West Coast Turf, a Palm Desert, Calif.-based sod grower and installer with offices in Tempe. "If an athlete cuts on it, it will provide a stable surface. It has enough weight where that stuff will not move."

In comparison, the sod West Coast provided for the Fiesta Bowl stood at 1 1/2 inches thick. In that instance, the company had "scalped," then replaced, a wide swath of grass between the field's hash marks and stretching from end zone to end zone. That section of grass had turned brown.

The method of laying sod over existing grass has been employed before.

For the 2004 Super Bowl, West Coast put a new layer of turf from its Casa Grande farm directly on top of the grass at Houston's Reliant Stadium. And during the past few years, the turf company has installed sod on the field at Chase Field for the Insight Bowl.

The Fiesta Bowl organization and the Arizona Sports and Tourism Authority jointly will be footing the $130,000 bill for new grass for the two Glendale bowl games. The organizations went with a trusted name in the turf business for the $455 million stadium's debut on the national college bowl stage.

The Fiesta Bowl will donate sod from the BCS game to Saguaro High School in Scottsdale on Feb. 8. For more information, visit www.westcoastturf.com