REDWOOD CITY, Calif. - The sky was cloudless and the temperature was 71 degrees here Monday, perfect conditions for a ballgame. Though Major Leaguers didn't play, the next best thing happened: A big league-quality field was born.

Helped by a $40,000 grant from the Baseball Tomorrow Fund, renovation of Sequoia High School's field was completed and a dedication ceremony was held. That all this occurred on Martin Luther King Day and on the eve of Barack Obama's historic presidential inauguration was no coincidence, said Rick Cooke, Sequoia's administrative vice principal. These events, Cooke said, "promise hope and opportunity for everyone."

To conclude the Major League Baseball Groundskeepers Conference in nearby San Jose, field experts from each team spent the day putting the finishing touches on the diamond. Though sprucing up a field has become a tradition when the groundskeepers meet, Cathy Bradley, BTF's executive director, said that this marked the first time that the Fund made a financial commitment to their efforts.

"Hopefully this will become an annual project for us," Bradley said.

As a result, the once-ordinary field resembled a Major League facility, with its Bayside Blend sod -- a mixture of bluegrass and rye grass, Yoder explained -- and a special clay mixture for the infield. The pair of local big league clubs made their mark as the Giants' grounds crew built the pitcher's mound and A's head groundskeeper Clay Wood supervised the sod work.

"But Luke's the one who put it all together," Washington Nationals head groundskeeper Larry DiVito said.

Bradley said that Sequoia High was selected among the plethora of Northern California schools due to its diverse student population and the willingness of local crews to maintain the field.

"It's going to be a little more intense," acknowledged Mike Craig, head groundskeeper for the Sequoia Union High School District.

Sequoia's varsity played a one-inning exhibition to conclude the festivities, but the most fitting moment occurred immediately before that, when the left-handed DiVito tossed a ceremonial first pitch. DiVito happens to be a 1985 Sequoia graduate whose passion for groundskeeping arose as he played on the baseball team.

"I started taking care of the field here just out of my own interest, doing the little things that I could, with the rake and the drag," DiVito said. "Once I figured out the water, it got a little more fun."

Now Sequoia's field can provide more fun for everybody.

This story was not subject to the approval of Major League Baseball or its clubs. 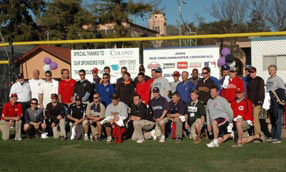 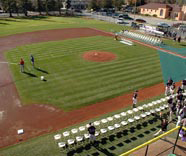 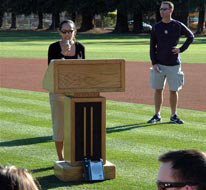