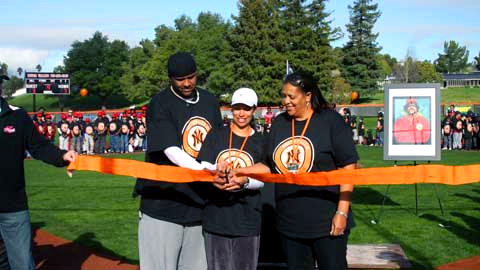 Yanks hurler helps reconstruct place where he first played
NEW YORK -- The baseball diamond that launched CC Sabathia's career looked nothing like the ace might have remembered it on the sunniest afternoons of his youth, having fallen into extreme disrepair over the years. Less than one year after the Yankees left-hander looked out with dismay at a Vallejo, Calif., field that was now overrun by weeds and unsuitable for baseball, the patch of land where Sabathia played his first innings has received a new lease on life. Sabathia formally dedicated the reconstructed Thurmon Field at 100 Whitney Avenue in Vallejo on Saturday, giving back to the North Vallejo Little League in yet another charitable endeavor for his PitCCh In Foundation. "We had a lot of help from some very dedicated people who are equally passionate as me about making sure kids get to play this great game of baseball," Sabathia said. "Thinking back to what was here in terms of weeds and old dugouts to what we have now; I'm as excited as the kids on the first day of the season." A baseball clinic was held on the field after the formal ribbon cutting, and the kids had quite the new playground to explore. Sabathia was joined by Major Leaguers Milton Bradley, Manny Parra and fellow Vallejo alum Joe Thurston to guide young players in drills. The field was re-done in an intense two-month construction project, as Sabathia's foundation coordinated with the Good Tidings Foundation and project general contractor Robert A. Bothman, Inc. to upgrade Thurmon Field with new irrigation, infield dirt, bases, dugouts and an electronic scoreboard. The field was also reseeded with 37,000 square feet of sod provided by West Coast Turf -- the exact same turf as the Oakland Alameda County Coliseum, where Sabathia grew up cheering on the A's. In addition, the field was adjoined by a rebuilt snack bar with new electrical work, plus the addition of a new water line, floor and roof. Thurmon Field's formal dedication featured Sabathia's mother, Margie, performing the honors of the ribbon cutting along with the hurler and his wife, Amber. It was timed to coincide with registration for the 2010 season, and Sabathia also pledged to cover the cost of the season fees for 100 Little Leaguers in North Vallejo this season. "It has been such a pleasure to work with CC, Amber and Margie on this project," said Larry Harper, founder of The Good Tidings Foundation, which supervised and organized suppliers for the construction. "The three of them are truly committed and possess an unwavering amount of energy for the well being of the deserving children in Vallejo." Bryan Hoch is a reporter for MLB.com. This story was not subject to the approval of Major League Baseball or its clubs.