Time was running out on Torrey Pines Golf Club.

The club, set to host the U.S. Open on its South Course in 2008, had been directed by the United States Golf Association and the PGA Tour to make several changes to the course, which is nestled atop the cliffs along the Southern California coastline in La Jolla, Calif.

With time at a premium and a completion date nearing, the club and its builder, Landscapes Unlimited, encountered a unique problem, however. 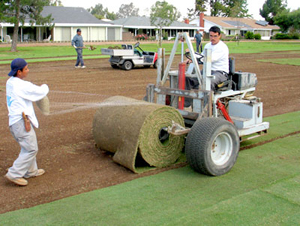 It was a win-win-win situation, West Coast Turf's John Marman said of the decision to strip sod from Lake San Marcos Country Club and install it on Torrey Pines' South Course. 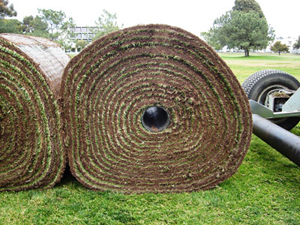 First, a little history on the project. Lincoln, Neb.-based Landscapes Unlimited was awarded a contract to convert two relatively short par-5 holes by today's standards into lengthy par 4s as well as the reconstruction of several fairway bunkers. The PGA Tour also requested that the bermudagrass on the golf course be replaced with kikuyugrass in an effort to make the already-predominant kikuyugrass golf course turf type consistent throughout the course. With the remodeling nearing completion and the golf course contractor needing sod, an unexpected problem arose.

The sod, which was to be custom grown, couldn't be harvested on time because of its lack of growth and establishment during a colder than normal winter. There was a solution to the problem, however, and it involved another golf course in San Diego, as well as Landscapes Unlimited and West Coast Turf.

With golfers playing off bare soil in anticipation of the sod, a decision was made to strip the sod from the nearby Lake San Marcos Country Club fairways. Lake San Marcos was doing the opposite of Torrey Pines. The course's officials wanted to take out the kikuyugrass fairways and replace them with hybrid bermudagrass. Kikuyugrass will perform better along the coast as opposed to slightly inland areas such as Lake San Marcos. West Coast Turf personnel performed the job to help Landscapes Unlimited finish the project.

"I guess you could say it was a win-win-win situation for all parties involved," said West Coast Turf spokesperson John Marman. "Landscapes Unlimited was thrilled to finish the job on time, Torrey Pines now has wall-to-wall kikuyugrass on the South Course, and Lake San Marcos received the hybrid bermudagrass fairways it desired without having to pay costly disposal fees."