Carmel, CA…….The Preserve Golf Club, a prestigiously ranked Golf Digest list of America’s Top 100 Golf Courses, has completed its turfgrass conversion project. In addition to improving course conditions at the Tom Fazio designed course, the switch from cool season turfgrass on fairways and the driving range, to warm season turfgrass, is expected to decrease water use by as much as 35 million gallons a year.

The cool season fairways were replaced earlier this year with West Coast Turf’s Santa Ana hybrid bermuda. The course was closed for just four months. This warm season turfgrass is not the standard for this region, but it is the ideal solution for water savings while not sacrificing quality of golf course play.

“Our members are ecstatic with the firmer, faster and consistently superior playability coupled with significant reductions in fairway water requirements. Our golf course is vastly improved and both our environment and community benefit. A win-win-win,” said James Student, chairman of the club.

Santa Ana hybrid bermuda, while drought tolerant and resistant, pushes the northern boundary of the transition zone at this location. It has an ability to stay greener longer going into winter, and green up faster in spring than other bermudagrasses. It also will use between 30-50% less water than the cool season grass. Rough areas were also changed out to other water saving native grasses.

“We’re quite pleased with the Santa Ana bermuda, especially its ability to tolerate cooler temperatures along with shade and still look very green,” said golf course superintendent Tim Taagen. “We’ve already had a few frosty mornings and yet it continues to look as green and healthy as it did when it was hot.  The membership couldn’t be more pleased with the choice and working with West Coast Turf was

fun. They made it easy and their top quality workmanship shows.  The most exciting thing is that the turf doesn’t require nearly the water we used on perennial ryegrass at a much lower cutting height,” Taagen said. 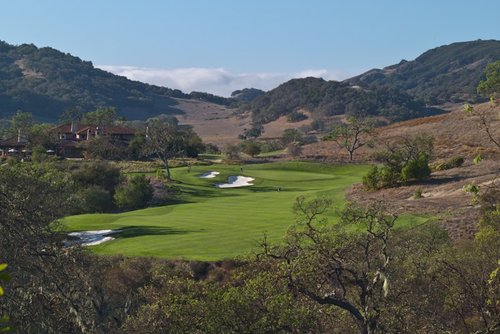 The Valley Club of Montecito in Montecito, CA and on the Golf Digest list of America’s Top 100 Golf Courses, and Montecito Country Club, a Jack Nicklaus Signature Course in Santa Barbara, CA, also converted their cool season turfgrass to West Coast Turf’s Santa Ana hybrid bermuda. They similarly wanted an exceptional environmentally responsible water saving product without sacrificing excellence of play. The Valley Club transitioned in two phases in 2012 and 2013, and Montecito Country Club is set to re-open in 2017.

Here are a few things to know about warm season grasses: