Santa Monica Unpaves Paradise and Rips Out a Parking Lot 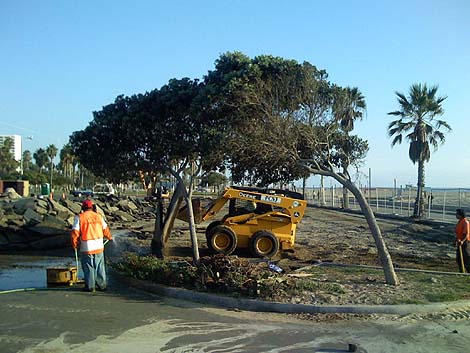 November 2 -- The City of Santa Monica is reversing singer Joni Mitchell's famous lyric, "they paved paradise and put up a parking lot," by doing just the opposite

This week, the first chunks of asphalt were torn out of a beach surface parking lot in Ocean Park to make way for a grassy lawn that is more than just green in color.

The 30,000-square-foot space -- which City officials say will be used to fly kites, toss Frisbees and picnic on the grass -- is also a state-of-the-art experiment in cleansing urban runoff before it trickles into nearby Santa Monica Bay.

"Not only will we get more recreation space, it's also going to help us with the urban runoff," said Brett Horner, a senior analyst in Parks and Community Facilities Planning. "Some of the runoff will be filtered through the turf."

Bankrolled with a $698,000 grant from the California State Water resources Control Board, the small park will include a well near the asphalt and one end and another further down that will capture water to test the effectiveness of turf's cleansing properties.

The wells, Horner said, "will measure how well it's done the job."

The water-cleaning park is likely the first of its kind anywhere, after a similar one slated for Stinson Beach was scraped seven years ago, Horner said.

Cars will be able to park on the turf -- which is treated with Netlon, a fibrous product that protects the grass -- during busy holidays around the Fourth of July, Memorial Day and Labor day, City officials said.

"It becomes part of the turf and absorbs the weight of the vehicle, so it doesn't leave ruts in the grass," he said.

During the select holidays, attendants will be on hand to open the gates that separate the park -- which is just north of the playground at the terminus of Ocean Park Boulevard between Fraser and Wadsworth Avenues -- from an adjoining asphalt lot, Horner said.

The City hopes to finish most of the construction by January and open the park in late April or early May.

"It takes 90 days for the turf to get established," Horner said. 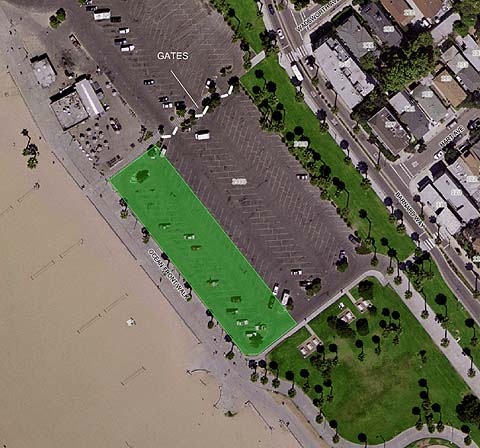